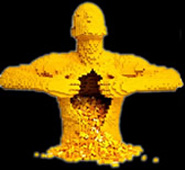 Course Info | Course Topics | Class Sessions | People & Orgs | Video | Links | Quotes
CREATIVITY:
Flow and the psychology of discovery and invention
Mihaly Csikszentmihalyi
Book summary by A.M. Vedpuriswar
http://www.vedpuriswar.org/bookreviews_Leadership.htm
This is a fascinating book by Mihaly Csikszentmi­halyi one of the less well known but probably one of the most serious management scholars of recent times. He brings out the importance of creativity, outlines its building blocks and explains how we can all become more creative.

Csikszentmihalyi points out that creativity cannot be understood by looking only at the people who appear to make it happen. Creative ideas need a receptive audience to record and implement them. And without the assessment of competent out­siders, we cannot decide whether the claims of a self-styled creative person are valid.
Creativity results from the interaction of a system consisting of three elements: a culture that contains symbolic rules, a person who brings novelty into the symbolic domain, and a field of experts who recognize and validate the innovation.
Creativity is the process by which a symbolic domain in the culture is changed.   So we must learn the domain well.  To master a domain, we must pay attention to the information to be assimilated. Bulk of our attention is committed to the tasks of surviving from one day to the next. And we do not do much with the small amount of attention left over because of the lack of focus. Diffused thinking leads to lack of concentration. Creativity is possible only when we are able to focus attention on the problem at hand.
Each of us is born with two contradictory sets of instructions: a conservative tendency, made up of instincts for self-preservation, self-aggrandizement, and saving energy, and an expansive tendency made up of instincts for exploring, for enjoying novelty and risk. We need both. But whereas the first tendency requires little encouragement, the second can wilt if it is not cultivated. If too few opportunities for curiosity are available, if too many obstacles are placed in the way of risk and exploration, the motivation to engage in creative behaviour is easily extinguished. Sustaining high levels of curiosity is the starting point of creativity.

When we use the term creativity, different images come to our mind. There are bright persons who express unusual thoughts, who are interesting and stimulating. Unless they also contribute something of permanent significance, these people must be called brilliant rather than creative.

Then there are people who experience the world in novel and original ways. These are individuals whose perceptions are fresh, whose judgments are insightful, who may make important discoveries. The author calls such people personally creative.
Finally, there are individuals who, change our culture in some important respect. They are the creative ones without qualifications.
Creativity, as mentioned before, consists of three main parts. The first of these is the domain, which consists of a set of symbolic rules and procedures.
The second component of creativity is the field, which includes all the individuals who act as gatekeepers to the domain. They decide whether a new idea or product can be accepted. For example, in the visual arts, the field consists of art teachers, curators of museums, collectors of art, critics, and administrators of foundations and government agencies that deal with culture. These people decide what new works of art must be recognised, preserved, and remembered.
The third component is the individual, who using symbols of a given domain, comes up with a new idea or sees a new pattern. His or her thoughts or actions change a domain, or establish a new domain.
The level of creativity in a given place at a given time does not depend only on the amount of individual creativity. It depends just as much on how well suited the respective domains and fields are to the recognition and diffusion of novel ideas.
Domain
Each domain is made up of its own symbolic elements, its own rules, and generally has its own system of notation. In many ways, each domain describes an isolated little world in which a person can think and act with clarity and concentration. The existence of a domain is perhaps the best evidence of human creativity. Domains create order that is not programmed into our genes by biological evolution.
There are several ways in which domains can help or hinder creativity. Three major dimensions are particularly relevant: the clarity of structure, the centrality within the culture, and accessibility.
Different domains are structured in different ways. The symbolic system of mathematics is organized relatively tightly; the internal logic is strict; there is a high degree of clarity and lack of redundancy. Therefore, it is easy for a young person to assim­ilate the rules quickly and jump to the cutting edge of the domain in a few years. For the same reasons, when a novelty is proposed, it is imme­diately recognized and, if viable, accepted. By contrast, it takes decades for social scientists or philosophers to master their domains, and if they produce a new idea, it takes the field many years to assess whether it is an idea worth adding to the knowledge base. No wonder, economists win the Nobel prize several years after they develop a new model or theory.
Field

A field is necessary to determine the worth of a new idea. No culture can assimilate all the novelty people produce without dissolving into chaos.

Fields can affect the rate of creativity in three ways. The first way is by being either reactive or proactive. A reactive field does not solicit or stimulate novelty.

The second way is the approach to screening new ideas. Some fields are conservative and allow only a few new items to enter the domain at any new given time. They reject most novelty and select only what they consider best. Others are more liberal in allowing new ideas into their domains.
Finally, fields can encourage novelty if they are well connected to the rest of the social system and are able to channel support into their own domain.
Domains and fields affect each other in various ways. Sometimes domains determine to a large extent what the field can or cannot do. This is probably more usual in the sciences, where the knowledge has several restrictions on what is possible. In the arts, on the other hand, it is often the field that takes precedence. The artistic establishment, without firm guidelines anchored in the past, evaluates new works of art.
Being in the right place at the right time is an important part of creativity. But to know that one is indeed staring at an opportunity needs a prepared mind. Many people never realise that they are surrounded by favourable circumstances and even fewer know what to do when the realization hits them.

Creative individuals are remarkable for their ability to adapt to different situations and to manage with whatever is needed to reach their goals. If nothing else, this distinguishes them from the rest of us. But there does not seem to be a particular set of traits that a person must have in order to be creative.

The Work of Creativity

The first is a period of preparation, becoming immersed, consciously or not, in a set of problem­atic issues that are interesting and arouse curiosity.