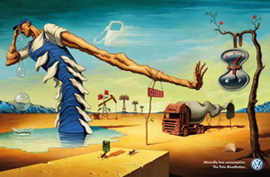 Creative rendering of innovation. What to aspire to both in product and presentation (From Mad Men)

A young engineer at NASA's Johnson Space Center has a great new concept for spacecraft design, but her attempts to convince her managers go nowhere.

As they assure her that her efforts are valued, her proposal is dismissed with administrative objections. "We don't want to repress dissenting views or innovation like this. That's not how we operate," says a manager who proceeds to do just that.

Cog, a 2003 British advertisement for Honda, was a huge popular, critical and financial success. Due to prohibitive cost for 120 seconds of airtime, the full version of Cog was broadcast only a few times, and only in the UK, Australia and Sweden. Nevertheless, it proved so popular that it went internationally viral (among the first videos to ever do so). Cog received more awards than any commercial in history and despite the limited TV run, over 250,000 people made use of the ad's interactive menu system, of whom 10,000 went on to order a DVD or brochure.

Founded by four Dartmouth students in 1971, Pilobolus Dance Theatre transformed contemporary dance. Its radical approach to collaborative artistic creation has led to extraordinarily inventive choreographies. This Hyundai commercial is all bodies, nothing else.

Also note the improvisational analog--human embrace as safety belt. Rather than make-do make-believe, the embrace can be understood as the higher real thing, a Platonic Form, for which the seat belt is the earthly substitute. Indeed, people may fail to wear a safety belt is because they see it too concretely as a metal mechanical device; when metaphorically understood as the warm embrace of a beloved wife and child, the act of buckling up a seat belt no longer implies locking oneself in, but rather ensconced protection.

Contextualizing: Driving a car can be understood as a extension of one's family life, indeed as a period where one is vulnerable away from hearth and home and engaged in what we often forget is a very dangerous activity. Situating the simulated driving inside the living room effectively illustrates this basic relationship.

Putting purpose front and center: Graphic displays of death and mutilation can be effective, but negative motivation only goes so far. Embrace Life provides an enduring, affirming reason to change behavior.